Do you have a specific writing style?

Writers generally come in two flavors: plotters and pantsers. A plotter has everything nailed down before they start writing. A pantser writes by the seat of her pants. I am somewhere in the middle, and call myself a plotser, meaning, I do both. Generally, the characters and the title come first, and then I try to hammer down the story’s hook. For example, Demon Hunting with a Dixie Deb is a fish out of water story. Sassy, the heroine, a pampered, privileged young woman from money, comes to town to sell the family timber mill, meets Grim, the demon hunter, and gets fairyfied. I knew all of that before I started writing. The details and everything in between came later.

Do you write in different genres?

Yes! The first book I ever wrote (actually, the first two) was a fantasy with wizards, trolls, hunky warriors, and dragons. Here’s the blurb:

Raine Stewart is dying, and no one can tell her why. For twenty-five years, she’s been poked, prodded, and tested for every disease known to man with no definitive answer. Lately, Raine’s convinced the culprit is a brain tumor. What else would explain the sudden appearance of her long-dead aunt and a vision of a strapping, dark-haired warrior in her bedroom mirror?

But a tumor can’t explain the arrival of a wizard dressed like a Renaissance Faire reject—a wizard who invades Raine’s home and carries her off to a land where magic and monsters are real. He has his reasons, he tells her—and really, “kidnapping” is such an ugly word.

I pitched that story for years without success, and then turned to my other love—romance!—in frustration. The demon hunter series followed. I still haven’t sold that fantasy, but I have high hopes!

I love both romance and fantasy, and am an avid reader of both genres. When it comes to romance, I read across the board. I love historical romance, but I also enjoy contemporary romance, romantic suspense, and paranormal romance. My love of fantasy goes back to childhood. I loved fairy tales. And, in the seventh grade, I discovered The Hobbit in the school library and was hooked. I am also a huge Harry Potter nerd.

Do you title the book first, or wait until it’s completed?

Both. When I wrote Demon Hunting in Dixie, the first book in the demon hunter series, I originally called it Dark Encounter. That quickly went out the window when the book turned snarky. I wrote down a list of things that screamed “southern to me,” and the title emerged from that. The rest of the demon hunter books, the titles came first. With my fantasy, the title came after the book was written.

What book are you reading now?

I work full-time and write, so my reading time is limited. I solved this problem with audio books. Right now, I’m listening to Lady of Quality by Georgette Heyer. Next will be Cotillion by Heyer, because it’s in my queue, but I listen to all sorts of books, including mysteries and urban fantasy.

What is your current work in progress?

Book five of the demon hunter series!  It’s called Demon Hunting with a Sexy Ex, and it’s the story of Duncan, a Dalvahni demon hunter, and Cassandra McKenna, a demonoid “witch.” Duncan and Cassie go way back, and they have a history. They are reunited and sparks fly, but Cassie is leery. She’s been burned by Duncan one time, and she’s not eager to repeat the experience. They get embroiled in a werewolf turf war, and discover they still have feelings for one another.

Is there anything you find challenging about your writing?

Pretty much all of it. I’m not kidding. I am a linear writer and I don’t write drafts. I start at the beginning and write and tweak until the darn thing is finished. It makes me pull my hair out, let me tell you.

Sex scenes are difficult, because I want them to be sensuous and emotional, and hit the right note. And also to happen at the right time, for the right reason. In Demon Hunting with a Dixie Deb, for instance, my heroine was engaged to another man. She couldn’t very well fall in the sack with my demon hunter until she was free. So, Sassy and Grim have to wait a while. I really stress over sex scenes!

Do you have advice for other writers?

Write NOW. Don’t wait. Start today. I started writing in my thirties, but I didn’t get published until I was over fifty. It took me that long to find my voice and learn the craft of writing. Writing takes practice. It takes trial and error. It means trashing what you’ve written and starting over . . . maybe a dozen times, until you get it right. So, write and write every day, if you can. The more you write, the better you’ll be at it. And read. You can’t write if you don’t read.

Finally, write what you love. Don’t try to write whatever’s selling, unless you already love it, because, if you don’t love it, the writing will suffer. Readers are smart. They will know. Writing is hard work, so find your joy by writing what calls to you. 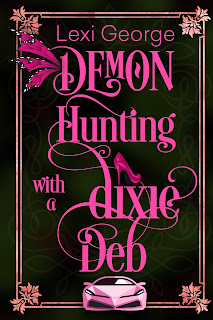 This Debutante Is Having A Ball!

Way down south in the land of cotton, one belle's plans are soon forgotten--when Sassy Peterson drives her Maserati off the road to avoid a deer and lands smack-dab in the proverbial creek without a paddle. The Alabama heiress should have known something weird was going on when she saw the deer's ginormous fangs. Hello, Predator Bambi!

But nothing can prepare her for the leather-clad, muscle-bound, golden-eyed sex god who rescues her. Who wears leather in May? That's just the first of many questions Sassy has when her savior reveals he's a demon hunter named Grim. Also: Why would a troop of fairies want to give her magical powers and rainbow hair? Why would a style-challenged beast called the Howling Hag want to hunt her down?

Most importantly, what's a nice debutante like Sassy doing in a place like this anyway? Besides feeling Grim . . .

“Sugar,” Sassy murmured. She laid her head on Grim’s shoulder. “Fairies.”
With a drowsy sigh, she relaxed against him and went to sleep.
Grim stilled. A surge of lust hit him, hard and fierce. Sassy smelled delightful, a dizzying combination of summer roses and female. Curling tendrils of her hair lifted to caress his jaw, like flowers reaching for the sun.
I am her sword and shield. The vow rose unbidden in his mind. Here and now I vow to protect her, from anyone or anything that threatens her.
An admirable sentiment, I am sure, the Provider said, but hardly necessary. She leaves tomorrow, and you return to the hunt. That is good, is it not?
Yes, of course.


Then why the hollow ache in his chest? 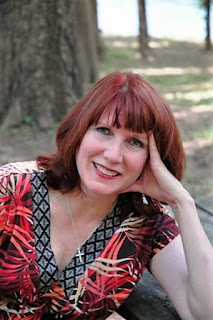 Lexi George writes snarky, Southern-fried paranormal romance for Kensington. Her debut novel, Demon Hunting in Dixie, was released in 2011, and a novella and two more demon hunter books followed. Demon Hunting in a Dive Bar, the third book in the series, was nominated for a RITA in 2014. The fourth book, Demon Hunting with a Dixie Deb, is due to be released May 24, 2016. Lexi enjoys reading and writing romance, but her first love is fantasy. A Meddle of Wizards is the story of Raine Stewart, a sheltered, sickly young woman who comes into her own when she’s transported to a magical world, discovers her burgeoning powers as an adept, and faces the evil wizard who killed her parents. Lexi’s day job as an appellate attorney requires reading transcripts filled with murder, mayhem, and worse. Perhaps this is why she enjoys stories filled with humor, action, adventure, and magical creatures. She has a violent aversion to sad movies, having been scarred by Old Yeller at the age of nine. She drinks tea, not coffee, and has never seen The Exorcist, because she is a world-class chicken. She is the third of four children, with all the attendant neuroses. 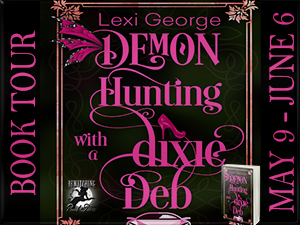